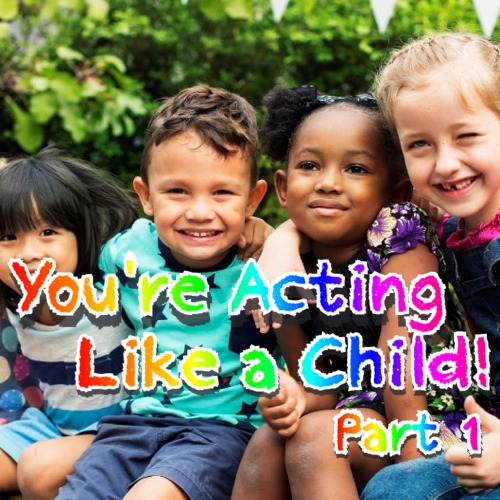 Typically when we hear the phrase, "You're acting like a child," we think of someone who is being immature. There are times, however, when the phrase could actually be considered complimentary. The key in determining if the phrase is a rebuke or a compliment is being able to distinguish between childISHness and childLIKEness.

To be childlike is to be humble. Jesus' disciples who walked with Him while He was in the flesh argued from time to time over who was going to be in the leading positions in His kingdom. As they continued to view His kingdom in a purely physical sense, their political aspirations for power led them to ask Him for the highest ranks among His followers. One instance of this is in Matthew 18:1-4. "At that time the disciples came to Jesus, saying, Who then is greatest in the kingdom of heaven? Then Jesus called a little child to Him, set him in the midst of them, and said, Assuredly, I say to you, unless you are converted and become as little children, you will by no means enter the kingdom of heaven. Therefore whoever humbles himself as this little child is the greatest in the kingdom of heaven." Being humble means recognizing that we are here to serve rather than to be served (Matthew 20:20-28). There is no room for self-centeredness in a Christian (Matthew 5:3). Humility leads to greater service, deeper love and a more powerful impact for the cause of Christ.

To be childlike is to be trusting. Luke 18:15-17 says, "Then they also brought infants to Him that He might touch them; but when the disciples saw it, they rebuked them. But Jesus called them to Him and said, Let the little children come to Me, and do not forbid them; for of such is the kingdom of God. Assuredly, I say to you, whoever does not receive the kingdom of God as a little child will by no means enter it." Just as small children do not question the guidance of their parents, so Christians are to have this same type of unwavering trust in God and His will. Will He faithfully care for us as He has promised or will He not (Matthew 6:25-34, et al.)? Will He save those who faithfully obey Him or will He not (Revelation 3:10)? Do we trust His promises?

To be childlike is to be harmless. Paul exhorts, "in malice be babes." (I Corinthians 14:20). The word translated "malice" means, "ill-will, desire to injure." Paul's words in Romans 12:17-20 very clearly define this childlike trait. "Repay no one evil for evil. Have regard for good things in the sight of all men. If it is possible, as much as depends on you, live peaceably with all men. Beloved, do not avenge yourselves, but rather give place to wrath; for it is written, Vengeance is Mine, I will repay,” says the Lord. Therefore if your enemy is hungry, feed him; if he is thirsty, give him a drink; for in so doing you will heap coals of fire on his head." Our actions should be motivated by a desire to lead others to God rather than to harm their souls.

Perhaps this final point can't be labeled as something that is "childlike" but it is nonetheless something that characterizes children, especially babies. "As newborn babes, desire the pure milk of the word, that you may grow thereby." (I Peter 2:2). Just as the hungry baby cries for his meal, we should diligently seek the spiritual feast that is available in God's Word (Matthew 5:6). Just as the baby will not cease his crying until he is filled, so must we persist in our study of the Bible.

"You're acting like a child." If you're humble, trusting, harmless and diligently studying God's Word, then you should take that a compliment. That same phrase can have negative connotations though. We'll consider those in part two.