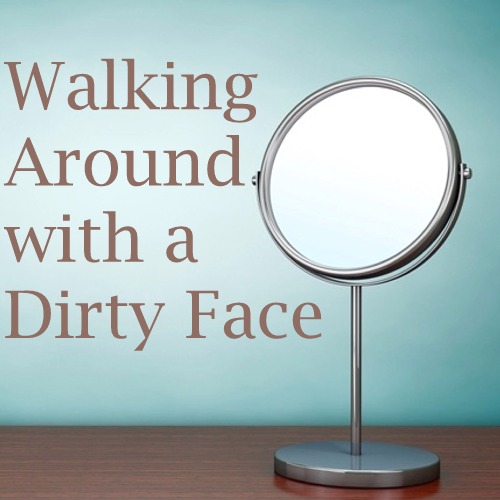 “But be doers of the word, and not hearers only, deceiving yourselves. For if anyone is a hearer of the word and not a doer, he is like a man observing his natural face in a mirror; for he observes himself, goes away, and immediately forgets what kind of man he was.” (James 1:22-24).

The imagery in the verses just cited is easily understood. No one who cares about his or her appearance would look at their reflection in the mirror, see a dirty face and then walk away without doing something about it. We care about our physical appearance. James employed his inspired illustration to urge us to care as much about our spiritual welfare. The Bible is the mirror that reflects the condition of the soul. Looking therein, we see ourselves in sin (Romans 3:23). Uniquely, the same Book that reveals our transgressions also reflects the spiritually whole souls we can become. The mirror of God shows our past and present as well as our future. What is it that washes away the stain of sin and produces spotlessness? It is nothing other than the blood of Christ. To have this cleansing, however, according to James, there must be action on our part.

The action in the verses noted above begins, as does all obedience, with the heart. Paul noted that the Roman brethren had “obeyed from the heart that form of doctrine to which you were delivered.” (Romans 6:17). The person with the dirty face must first want to look in the mirror before he is able to do anything about his appearance. The sinner must first want to look into the perfect law of liberty given to us by God before he can or will make a change in masters. As long as he is satisfied with his condition, he will continue to serve Satan (Matthew 6:24).

Looking at one’s disheveled appearance in a mirror is not sufficient to correct it. One must be willing to see the dirt and admit that his visage is unkempt. If he sees his reflection and pronounces himself in no need of cleansing, he will do nothing. In like manner, the person looking into the Word of God must have the courage to see what the Lord says about sin and then make personal application. If he reads one of the many passages that speaks of sin and then walks away from the Word thinking that none of those words apply to him, he will have a soul no cleaner than before he opened the Bible. Sadly, far too many people see only what they want to see in God’s Word, never realizing that their sins are clearly shown therein.

Viewing one’s reflection, seeing the untidiness of one’s appearance and admitting that changes need to be made, the individual must then actually make the necessary changes. Imagine a man at the mirror saying, “I have a dirty face. It needs to be cleaned. I should clean it.” Now imagine him walking away, either completely neglecting the need to change or saying, “I will change, but not right now.” Does that not remind us of so many who have seen their sins in the Word of God and then walked away either forgetting that they need to obey God or saying, “I will obey later”? Paul wrote, “Behold, now is the accepted time; behold, now is the day of salvation.” (2 Corinthians 6:2). Just like the man looking in the mirror will soon forget the dirt on his face if he doesn’t act when he sees it, the person who looks into the Word of God will soon forget the stain of sin on his soul if he doesn’t obey quickly (see Luke 8:12).

James’ word picture ends with his comments in James 1:25. “But he who looks into the perfect law of liberty and continues in it, and is not a forgetful hearer but a doer of the work, this one will be blessed in what he does.” The word translated “looks” suggests a more intent peering at something, a more diligent observation than the word “beholding” in verse 23. It indicates a person who is aware of his appearance. In application, the person who is aware of his or her need for salvation and the continued blessings of God is like that individual.

The Word of God can show us who we are and what we can become, especially in the spiritual realm (Hebrews 4:12). Will we see therein the iniquities that blemish us and then do something about them or will we spend our lives in forgetfulness of what God has said, walking through life with dirty faces and going into eternity unprepared with sin-stained souls?