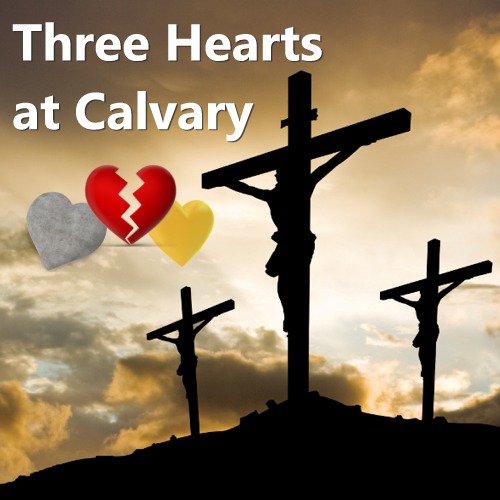 Many times in the Bible the word, “heart” has reference to the very essence of one’s being. Romans 6:17 speaks of obeying God’s Word from the heart. Several thousand men and women were “cut to the heart” when they heard the Gospel first preached in Acts 2 (Acts 2:37). Jesus said in Matthew 6:21, “For where your treasure is, there your heart will be also.” The usage of the word in this manner suggests that our thoughts and desires are focused where our “hearts” are focused. That being the case, consider for a moment the different types of hearts that were present on the dreadful day when Jesus Christ was mercilessly crucified.

In that scene we see abundant evidence of the hard heart. A man who had undergone betrayal, humiliation and abuse and who was now doubtlessly covered in blood was hanging by nails from a rugged wooden instrument of destruction whose design was solely to produce agony and ultimately death to its occupant. At the foot of this cross were not multitudes turning away in disgust. Instead, Roman soldiers, having gambled for Jesus’ clothing, were sitting there watching the torture. Others walked by with nothing but insults on their lips. As they watched Jesus on the cross, the Jewish leaders demonstrated their contempt with their provocative words, “He trusted in God; let Him deliver Him now if he will have Him…” (Matthew 27:35-43). The very idea of watching a man die would be appalling to most of us. Seeing that man die a slow, painful death would push us to the limits of what our sense of decency could withstand. Knowing that man was dying for offenses He never committed would be unbearable. Yet the scene at Calvary shows how depraved and how deprived of humanity people can become when their hearts are hardened. Hearts of stone with not even a tinge of remorse for their actions or pity for Jesus were present on that day.

Also evident at Calvary was the fearful heart. Where were those disciples who had so recently boasted that they would go to prison for and even die for the Lord (Mark 14:27-31; Luke 22:33)? Their bravado had cooled. When pushed, they had run away in the Garden of Gethsemane (Mark 14:50) and now they were helpless to aid their Master. The disciples weren’t the only ones of fearful hearts there. The Jewish leadership had engendered a climate of fear among the masses prior to the cross (John 7:13; 9:22). That fear was evident when, at first, the crowd in Jerusalem wanted the murderer, Barabbas to be put to death but then changed their minds when the chief priests stirred up the people to ask for Jesus’ death instead (Mark 15:5-11).

There was one more heart at Calvary and its characteristics were multi-faceted. The heart of Jesus was a forgiving heart as was demonstrated in His prayer from the cross, “Father, forgive them, for they do not know what they do.” (Luke 23:34). The heart of Jesus was also a compassionate heart as was evidenced when He looked down and saw His mother and the disciple known simply as the one “whom he loved” and instructed them to care for one another (John 19:26-27). One other trait of the heart of Jesus was clearly present, even though it is not expressly noted in the Scriptures. Jesus had come to seek and to save that which was lost (Luke 19:10). At one point during His earthly ministry He stood on the outskirts of Jerusalem, beheld the city, and wept over it (Luke 19:41). He had witnessed the multitudes following Him and “when He saw the multitudes, He was moved with compassion for them, because they were weary and scattered, like sheep having no shepherd.” (Matthew 9:36). He dearly loved those He came to save (John 15:13). But one of His own betrayed Him for mere money (Matthew 26:14-16), those closest to Him did not grasp the depths of His sorrow in the shadow of the cross (Matthew 26:36-46), and the very ones He loved enough to leave heaven’s portals and dwell in the flesh treated Him as if He were worse than their worst enemies. With this in mind, it’s difficult not to picture in our Lord as He hung bruised and bloodied on a cruel cross on Calvary over 2,000 years ago, a heart that was broken.