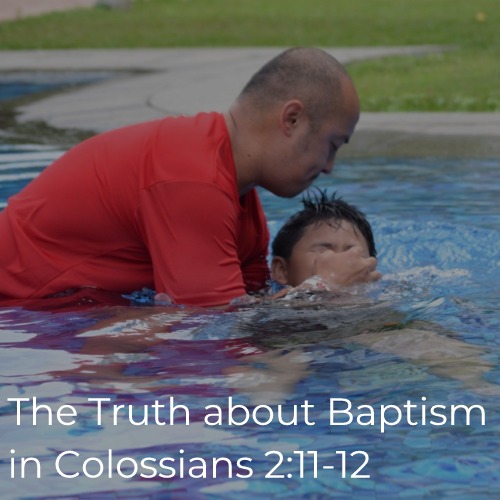 There is a powerful passage in the second chapter of Colossians that clearly demonstrates the fact that baptism is immersion in water for the forgiveness of sins. Having just pointed out to the Christians in Colosse that they were complete in Christ (Colossians 2:10), Paul wrote, “In whom also ye are circumcised with the circumcision made without hands, in putting off the body of the flesh by the circumcision of Christ: Buried with him in baptism, wherein also ye are risen with him through the faith of the operation of God, who hath raised him from the dead.” (Colossians 2:11-12). The participial phrase, “buried with him in baptism” agrees with the initial phrase of verse 11, “ye are (were) circumcised.” The meaning of this is that the circumcision of which Paul wrote in that verse was effected in the burial in baptism.

Circumcision has reference to that which has been put off or cut off. Physical circumcision, in which a portion of male flesh was cut off, was instituted in Abraham’s day (Genesis 17:10-11) and was also commanded under the law of Moses (Leviticus 12:3). Although the New Testament speaks of physical circumcision, it does so mostly in a negative light. The best known reference to circumcision is in Acts 15 where we find that some in the Lord’s church were making an issue of it, insisting that circumcision be retained in the body of Christ as a requirement for salvation (Acts 15:1). After much discussion, the apostles and elders who had gathered (Acts 15:6) wrote a letter to the churches regarding the matter, reminding the early church that no such commandment could be found in the Gospel of Jesus Christ. In short, there was (and is) no authority for physical circumcision as a religious act in the New Testament.

In the text under consideration in Colossians 2, physical circumcision is not the topic of discussion. Yes, something is referred to as having been cut off or put off, but it’s not a portion of flesh that was cut off by human hands. Instead, it was the “body of the sins of the flesh” that had been cut off via the circumcision of Christ, or Christ’s circumcision. That which had been cut off for these Colossian Christians was their sin. How was it done? Grammatically speaking, it was done when they were “buried with him in baptism.” Some try to argue that as physical circumcision was a sign of one being in a covenant relationship with God under the law of Moses, baptism also follows one’s entering into a covenant with the Lord. In other words, some aver that baptism follows salvation. This text says otherwise. According to Paul, spiritual circumcision occurs in baptism, not before. When were the sins of these Colossian Christians cut off? They were cut off when they were buried with Christ in baptism. This truth still stands today.

Beyond the fact taught here that baptism is for the forgiveness of or cutting off of past sins, the verse also teaches that baptism is immersion. The word translated “baptism” itself means “immersion.” As if that weren’t sufficient evidence, Paul added the word “buried.” They were buried (put beneath an element) in immersion. They didn’t have water sprinkled or poured on them. They were buried in immersion. It’s beyond strange to hear someone talk about “modes” of baptism. Some denominational groups offer individuals the choice between sprinkling, pouring or immersion. This passage teaches that there is no such thing as a “mode” of baptism. It is immersion and nothing else.

Still another truth evident in this passage is in regard to the element into which these Christians had been baptized or immersed. The New Testament speaks of baptism (immersion) into fire (Matthew 3:11), suffering (Matthew 20:22-23), the Holy Spirit (Acts 1:5) and water (Acts 8:36-39). Only one baptism can be the subject of Paul’s statement. The answer regarding which one is spoken of here is seen in that this baptism was one from which an individual was “risen”. The only baptism in which one is immersed into an element and then risen out of it is immersion in water.

One final fact regarding baptism here is that it involves faith. Paul told the Romans, “So then faith cometh by hearing, and hearing by the word of God.” (Romans 10:17). Not only does this verse exclude babies as candidates for baptism, for they cannot have faith, it also clearly teaches that knowledge of the purpose of baptism, i.e., for the forgiveness of sins, is essential. The Colossians knew that when they had been buried with Christ in immersion, they had been forgiven of sins and had risen from the water as new creatures (II Corinthians 5:17), quickened together with Christ (Colossians 2:13).

Many try to argue against these truths regarding baptism, but none do so successfully. God’s Word is clear and must be obeyed in order to enjoy forgiveness of past sins and the hope of eternal life.