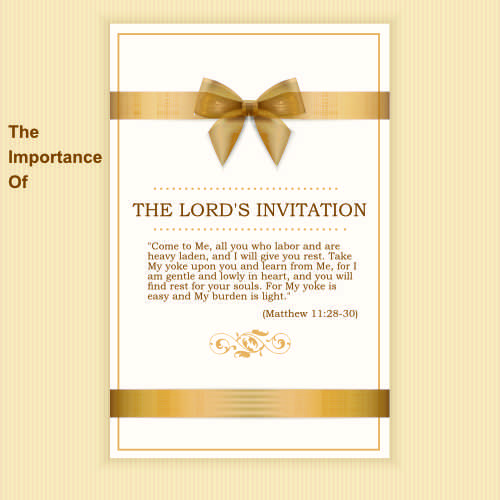 Imagine that you have just come from a restaurant where you enjoyed a sumptuous feast. You dined on the juiciest steak, the freshest vegetables and the most tantalizing desserts you've ever put into your mouth. To top it all off, not only were you allowed to eat all you wanted, you didn't have to pay anything for the meal! That's right. It was free for you and anyone else who found their way to the restaurant.

Now imagine that on your way home you see a man who clearly has not had a good meal in days, if not weeks. You stop and listen to the man tell you how hungry he is and how he would love something to eat if he only had some money. "Why," you say. "I just came from the most fabulous restaurant I've ever been to. You can get all you want to eat and it won't cost you a penny." Then, without another word, you leave. You've seen a starving man, you've told him you know where he can go to satisfy his hunger but you go away without having told him where to go to get the free meal!

Each time the church assembles, be it on Sundays or Wednesday evenings or during Gospel meetings, the faithful Gospel preachers who stand before us close their sermons with the Lord's invitation. This is not a "church ritual" or a "longstanding tradition" but is instead a most scriptural and fitting way to conclude a lesson from God's Word.

Jesus extended His invitation in Matthew 11:28-30: "Come to Me, all you who labor and are heavy laden, and I will give you rest. Take My yoke upon you and learn from Me, for I am gentle and lowly in heart, and you will find rest for your souls. For My yoke is easy and My burden is light."

Peter offered the invitation at the conclusion of his inspired message in Acts 2. "Then Peter said to them, Repent, and let every one of you be baptized in the name of Jesus Christ for the remission of sins; and you shall receive the gift of the Holy Spirit." (Acts 2:38).

When Paul stood before king Agrippa, he concluded his Gospel message by exhorting the Jewish leader, "King Agrippa, do you believe the prophets? I know that you do believe." (Acts 26:27). King Agrippa replied, "You almost persuade me to become a Christian" or, as the American Standard version translates the verse, "With but little persuasion thou wouldest fain make me a Christian." (Acts 26:28).

Paul also wrote in II Corinthians 5:11, "Knowing therefore, the terror of the Lord, we persuade men…" One of the definitions of the word translated, "persuade" is, "to move or induce one to persuasion to do something." In extending the Lord's invitation, the faithful Gospel preacher is seeking to persuade the lost and fallen to come to the Father through Jesus Christ to enjoy the blessings that are in Him (Ephesians 1:3).

Let's fire up our imaginations one more time now. You're a person who has never heard God's truth but, out of curiosity, you come one day to worship with the Lord's church. You are impressed with the simplicity of the worship. You listen intently as the preacher delivers a powerful lesson about sin and its consequences. You are on the edge of your seat, ready for him to answer your burning question, "What must I do to be saved?" Then, without another word, the preacher steps down from the pulpit and people around you begin singing. The preacher saw you, a spiritually starving individual. He knew of the free gift of salvation (Romans 6:23) and how you could receive it, but he went away without having told you what to do to in order to obtain forgiveness of your sins!

The Lord's invitation is such a vital element of a sound Gospel sermon. The man who stands before an audience to preach should be aware of the solemn responsibility and privilege it is to tell his listeners of God's plan of salvation. Those in the audience should be equally aware of the seriousness of this heavenly exhortation to obedience. It will be okay if we don't put on our coats or organize our possessions until later. Listen to what's being said in the invitation. Even if you and I don't plan to respond publicly at that moment, our seeming lack of concern for this part of the lesson could very well disrupt the thoughts and discourage the hearts of those who would respond.

"Preach the word! Be ready in season and out of season. Convince, rebuke, exhort, with all longsuffering and teaching." (2 Timothy 4:2).