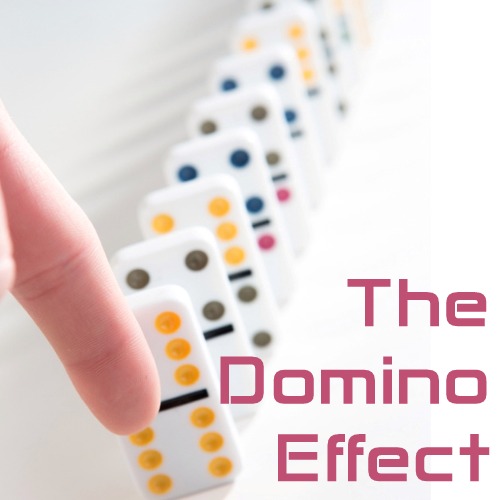 I don't recall when I discovered that dominoes could actually be used in a game. To me they had never been anything more than numbered tiles that could be stood up, placed side by side and then knocked down to make both an impressive chain reaction as well as a terrific noise. Actually, I still know very little about the game of dominoes. I do continue to enjoy the cause and effect of a pattern of falling dominoes though.

This demonstration of cause and effect brings to mind our own individual actions and how they impact the lives of those around us. Paul wrote, “For none of us lives to himself, and no one dies to himself.” (Romans 14:7). The seventeenth century poet, John Donne expressed a similar sentiment when he wrote, "No man is an island." What we say, what we do, where we go, indeed, how we live, can have an effect on others.

From a positive standpoint, our teaching of the Gospel to one soul who obeys can lead to numerous additional conversions. There are many fine examples of that one person's conversion, which in turn led to the salvation of many other souls. Only the Lord knows how many will be in heaven just because one Christian took the time to teach just one soul who then obeyed. In a similar vein, the Lord recognizes the power of just a single act of righteousness (Matthew 10:42). Such simple deeds open doors that lead others to not only move closer to God but also become servants themselves. Each time a Christian serves God, he or she pushes down the first domino that leads to other lives being touched.

Negatively, our disobedience can lead an untold number astray. A moment's surrender to the temptation to commit fornication, an act of stealing, a venture behind the wheel of a car while drunk are just examples of sins that not only lead one's own soul to destruction but also have the potential to drive others from the path of righteousness. Parents, spouses, children, fellow Christians, non-Christians we might hope someday to win to Christ are just a few of the individuals who can be hurt by just a single sin we commit. Each sin in which we engage has the potential to knock down the first domino and, sadly, cause many precious souls to fall right along with it.

Of the many ploys that Satan uses to ensnare us, one is his temptation to undervalue both acts of righteousness and acts of disobedience. Remember how Elijah felt that he hadn't really accomplished much after he routed the false prophets by the power of God (1 Kings 18-19)? He wanted to quit. We might also feel that our deeds don't amount to much, but if we could only see the lives we've touched by our holy living, even the lives of people we don't know and the lives of generations yet to come, we would be greatly encouraged to keep on diligently doing that which is right. On the other hand, remember how the serpent persuaded Eve and then how she persuaded Adam that just one bite of the forbidden fruit wouldn't really hurt anyone (Genesis 3:1ff)? The evidence of the damage of those single acts of disobedience is all around us.

Please carefully consider this fact: Every opportunity that you and I have to choose between right and wrong is like the first domino in a long line of dominoes. What we do or don't do, say or don't say, where we go or don't go can tip that first domino and cause it to produce an effect that will touch countless lives both today, tomorrow and on down through time. Will we tip that domino in the direction of good or evil? The choice is ours (Deuteronomy 30:19; Joshua 24:15).