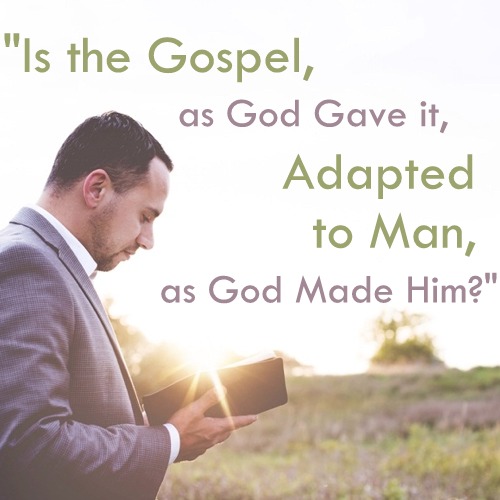 Over 80 years ago, N. B. Hardeman stood before a standing room only crowd in the Ryman Auditorium in Nashville, Tennessee and delivered a series of Gospel sermons that is still renowned for its scriptural soundness and spiritual depth. One of the messages in that series bore the title of this article. It asked a question that is still relevant. Rather than try to rewrite Mr. Hardeman's sermon, I'd like to instead bring forth some of its highlights for your consideration. The message in its entirety can be found on pages 60-70 of Hardeman's Tabernacle Sermons, Volume IV (Gospel Advocate Company, Nashville, Tennessee, 1975).

The gist of the sermon was whether or not the Bible is sufficient for us today. The question was asked, "Is the plan adapted to the man?" Mr. Hardeman answered, "I think implied in this is the very foundation of difference between the church of Christ and most religious denominations of our land…The denominational world teaches that in conviction and conversion there must be a power in addition to and distinct from the Word of God to bring about the conversion of an alien sinner." He then said, "Was that plan, and is that plan, fitted, suited, and adequate to the needs of the man whose soul He was seeking to save? Now if it be not commensurate and adapted, I want to raise this point with you: Why is it not? God made man; God made the plan. Why didn't He fix the plan suited to the man for whom it was intended?"

The lesson then proceeded to look at the makeup of man. Mr. Hardeman pointed out the need to first look at man and "find that which must be converted." He put to powerful use several succinct Scriptures that showed it is the heart of man that must be converted (Mark 2:5; Matthew 13:15; Acts 8:37), further demonstrating that the heart is "that part about us that thinks, that reasons, that understands, that believes." He also noted that the heart intends, purposes and executes (Hebrews 4:12; 2 Corinthians 9:7; Romans 6:17). He showed that the heart desires (Romans 10:1), is the seat of love (Matthew 22:37) and is the seat of affection (Proverbs 3:5). Each of these is a characteristic of the heart. Mr. Hardeman then summed up these characteristics of the heart in three words: Emotion (the heart trusts, confides, reposes), Intellect (the heart thinks, reasons, understands, believes), Will (the heart intends, purposes, executes). Here are his concluding comments about the composition of man: "Now there's the man, as God made him. That's the thing that God wants converted (the heart, mrg). He wants my thinking turned in the right direction; my reasoning after God's pattern; my understanding changed to the right, my faith centered in Jesus Christ our Lord. He wants my intentions to be to do His will, and my purpose to walk in His footsteps, and my determination to be to execute…the will of God."

Having established man's nature, Mr. Hardeman turned to the characteristics of the Gospel, noting first that it is comprised of three facts, namely, that Jesus died, was buried and rose from the dead on the third day (1 Corinthians 15:1-4). He then pointed out that the Gospel also involves commands that must be obeyed (2 Thessalonians 1:7-9) as well as precious promises such as forgiveness of sins and the hope of eternal life. The Gospel thus is made up of Facts, Commands and Promises.

At this point, as the sermon was coming to a magnificent climax, Mr. Hardeman clearly answered the question stated in the title of this article and the original lesson itself. "Is the Gospel, as God gave it, adapted to man, as God made him?" Man is made up of an Intellect, a Will and an Emotional nature. The Facts of the Gospel challenge our Intellect. The Commands of the Gospel challenge our Will. The Promises of the Gospel satisfy our Emotional needs. In short, God’s "divine power has given to us all things that pertain to life and godliness, through the knowledge of Him who called us by glory and virtue." (2 Peter 1:3).

The message of the sermon was and is crystal clear. The same God who made us is perfectly capable of fashioning a message of salvation, THE message of salvation, that is entirely suited to the needs of our souls. We don't need to try to change the Gospel. To do so is both presumptuous and sinful (Revelation 22:18-19).