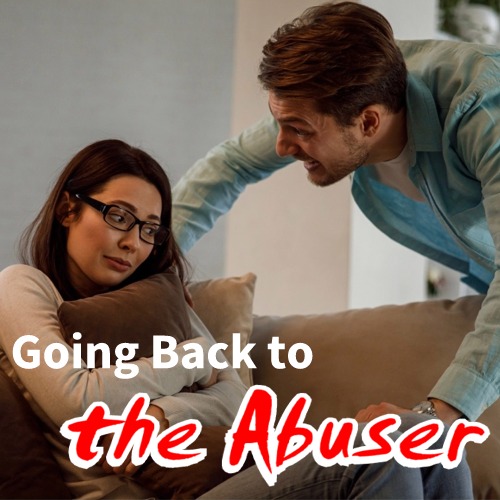 I’ve seen it happen and it always breaks my heart. A woman falls in love with a man. After a period of time, he begins to abuse her. Perhaps it doesn’t happen until after marriage. Perhaps it happens before. He might do it physically. He might do it emotionally. He might do both. Her friends and family eventually see evidence of the abuse. The physical abuse is easier to see than the emotional abuse, but either one of them takes a significant toll on the victim’s health and emotional state. Everyone around her tells her she needs to get away from him. She does, but only for awhile. His constant pleading with her about how much he needs her, how he can’t live without her, how he will change his ways, etc. chip away at her better judgment and she goes back. After a brief honeymoon period of reconciliation, the abuse begins again. Why did she go back? There are many possible reasons but two of them are typical. One reason is that she is afraid of the unknown. She wants a man in her life but she is afraid she will never find another one. Going back to the abuser, even though it is an inferior relationship, is better than not having a man at all, or so she thinks. Another reason is that her self-esteem has been beaten down so badly that she feels she can never have anyone any better. She is convinced that an abusive relationship is what she somehow deserves and so she goes back with the intention of making the best of it. She will even exaggerate the man’s “good” qualities and minimize his abusiveness in order to justify her decision.

Having said all that, let me offer some clarifications. Yes, this can happen the other way around. The woman can be the abuser and the man can be the one who keeps going back. As well, this article is not a discussion of the scriptural parameters of divorce and remarriage. I am simply relating some sad situations that I have seen in my 50+ years of life. I have wept bitter tears as I watched it happen. Also, this article is not just about a man-woman relationship. It goes deeper than that as you will now see.

When a Christian goes back into the world and returns to service to Satan, is he or she not also going back to the abuser? The devil steals our joy, our peace, our contentment. He holds us captive to our fears. He is the father of lies (John 8:44). He whispers in our ears that we are insignificant masses of flesh that rose out of the primordial slime. He tells us that we can’t ever get any better or ever have anything better. There is no heaven and there is no hell, he says. There is no God and, even if there were, He would never do anything to help us here, much less save us in eternity, because we are simply worthless. Every Christian at one time escaped that abusive relationship with Satan (Hebrews 6:4-5), but some have grown fearful of the unknown. They have chosen to walk by sight rather than by faith (II Corinthians 5:7). They find greater comfort in going back to the abuser, even though they know it is an inferior relationship, and figure they will just take their chances and make the most of it.

Israel in the wilderness was a microcosm of this problem. They could have had the best by entering into the earthly promised land of Canaan, but they were afraid (Numbers 13). They cried out that they wanted to go back to Egypt because at least they had food there (Numbers 11:50). Two of them, Dathan and Abiram, even referred to Egypt  as “a land flowing with milk and honey.” (Numbers 16:13). “A land flowing with milk and honey”? Wasn’t this the same Egypt that abused Israel so badly that the Israelites were crying out to God for relief? (Exodus 2:23). Talk about exaggerating the “good” and minimizing the abuse! God gave Israel a way of escape from the abuser, Egypt. Israel said, “We don’t believe there is anything better ahead for us. We’ll go back. We prefer the misery of the known to the uncertainty of the unknown.”

When an abused woman meets a man who is kind towards her, she might find it difficult to believe that any man could treat her so well. She might even feel that she is not deserving of such special treatment. The abuser has convinced her of that. It’s possible that Christians have been ensnared by the same lie. Like the father who welcomed his prodigal son with open arms (Luke 15:20), our eternal Father wants to give us what is best. He wants to send forth showers of blessing (Ezekiel 34:26). Satan, the abuser, is seeking to destroy us. The loving God, through His Son, Jesus Christ, is seeking to bless and save us. He asks us to trust Him and believe that He will take care of us. “I will never leave thee, nor forsake thee.” (Hebrews 13:5). Going back to the abuser, Satan, is like a dog returning to eat its vomit and a sow going back to roll around in the mud (2 Peter 3:21-22). That’s not a pretty picture, but that’s what Satan, the abuser, has to offer. Move on from the abuser, dear Christian. Get away from him. He has nothing for you. There is someone better. His name is Jesus. Walk faithfully with Him.