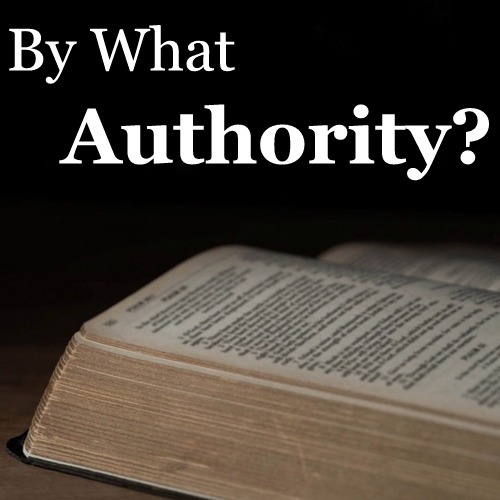 "Now when He came into the temple, the chief priests and the elders of the people confronted Him as He was teaching, and said, By what authority are You doing these things? And who gave You this authority?" (Matthew 21:23).

Once again the Jewish leaders were challenging Jesus. In their minds, since none of them had authorized Jesus to teach, His doctrine was of little value. Jesus' reply, followed by the Jews' puzzling over His reply, clearly indicates that they really weren't interested in His answer. They just wanted to know why He was teaching when they had not given Him their permission. After all, they were the "religious leaders" of the day. Who told Jesus He could teach publicly, and teach things contrary to their doctrines at that?

Jesus knew that they were trying to set Him up. At times when He did clearly indicate that His teachings were authorized by God, He was rebuked and threatened for making Himself equal with God (John 5:17-18; 10:22-39). If they had listened to Him over the months that He had taught, they would have known that He did have authority for His doctrine and that this authority came from God. "He who does not love Me does not keep My words; and the word which you hear is not Mine but the Father’s who sent Me." (John 14:24).

"By what authority?" is an excellent question when the one asking it is sincere and really wants to know the answer. In fact, that question should be the litmus test for all that we do in obedience to God. What indeed is our authority for what we do in worship? What is our authority for the terms of membership in and the organization of the church? Everyone who is searching for the truth should be asking, "By what authority?". In so doing they will be able to weed out the man-made organizations and clearly identify the church that Jesus built.

Whenever we discuss spiritual differences with our friends and family, we should ask them to provide the authority for what they do. In like manner, when we are asked why we do what we do, we should be prepared to give the answer from our authority, God's Word. "But sanctify the Lord God in your hearts, and always be ready to give a defense to everyone who asks you a reason for the hope that is in you, with meekness and fear." (1 Peter 3:15).

When you're involved in these discussions, be prepared for statements like, "The Bible is outdated" and "It doesn't matter what you believe, just as long as you believe," etc. This is often a person's rationalization for the fact that they don't have New Testament authority for their practices. Regardless of their perceived lack of concern for authority, the fact of the matter is that since the Lord is going to use His Word as the authority in judgment (John 12:48), they should be concerned here and now that His Word and His Word alone authorizes what they say and do.

"By what authority?" Here's the final word on the matter: "Because all flesh is as grass, and all the glory of man as the flower of the grass. The grass withers, and its flower falls away, but the word of the LORD endures forever. Now this is the word which by the gospel was preached to you." (1 Peter 1:24-25). As countries and civilizations have come and gone over the past 2,000 years, so also have their laws. As American citizens, we do not appeal to the laws of first century Rome for our authority. We appeal to the laws of the USA. The laws of ancient Rome are dead and gone. However, the law of Christ (I Corinthians 9:21) continues to be the standard. Because of this, we must be able to give a "thus saith the Lord" for all we do.

"By what authority?” is the question. “By God's authority as stated in His written Word, specifically, the New Testament” is the answer. Anything less is unacceptable.