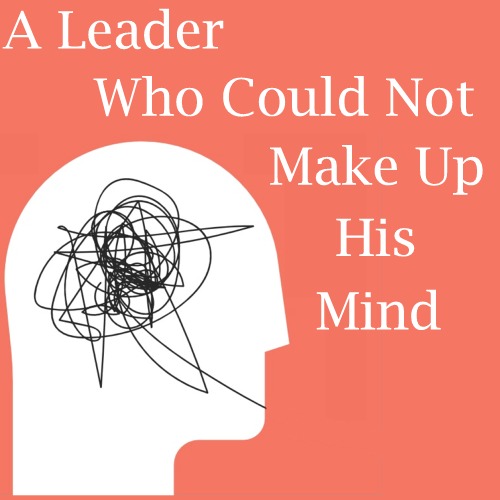 The reign of Zedekiah, king of Judah, was not a happy one. For two years his city of Jerusalem was besieged by the Babylonians and their king, Nebuchadnezzar. Famine prevailed. The walls of the city were literally crumbling. The armies of Judah were scattered. Zedekiah saw his sons murdered just prior to having his eyes “put out” by the Babylonians. This is all chronicled for us in 2 Kings, chapter 25. Read there beginning in verse one and you’ll get a graphic description of the horrible end of Zedekiah.

Even though little is written about this disobedient monarch, many powerful lessons could be gleaned from this single inspired sentence regarding his life: “He did evil in the sight of the LORD his God, and did not humble himself before Jeremiah the prophet, who spoke from the mouth of the LORD.” (2 Chronicles 36:12). There is, however, a series of events described in the book of Jeremiah which tells us a great deal more about the character of Zedekiah, events which lead me to label him as a leader who could not make up his mind.

Jeremiah, chapter 37 opens by telling us of the ascension of Zedekiah to the Judean throne. Even though verse two says that he did not hearken to the words of Jeremiah, we find in verse three that he sent messengers to Jeremiah to ask him to “pray now to the LORD our God for us.” So in one verse we find the king fighting against God and in the next verse we find him wanting God’s help. Which is it going to be, Zedekiah? Will you be for God or against Him?

After Jeremiah proclaims God’s plan for the Babylonians (Chaldeans) to ransack Judah for their disobedience, some of Zedekiah’s princes accuse the weeping prophet of being a traitor and imprison him. There in prison he is visited by Judah’s king who proceeds to ask, “Is there any word from the Lord?” (Jeremiah 37:17). Now Zedekiah is seeking God again and is told that he will be delivered into the hand of the king of Babylon. Following this, at Jeremiah’s request, Zedekiah changes Jeremiah’s terms of imprisonment and it appears that the king’s heart just might be softening.

As chapter 38 commences, the princes of Judah are coming to Zedekiah and complaining about Jeremiah. The prophet had dared to speak God’s truth to the people that the Babylonians would destroy the land but that the people would be spared if they would willingly go with the Babylonians into captivity in their country. “Therefore the princes said to the king, Please, let this man be put to death, for thus he weakens the hands of the men of war who remain in this city, and the hands of all the people, by speaking such words to them. For this man does not seek the welfare of this people, but their harm.” (Jeremiah 38:4). One would hope that Zedekiah would have replied, “Jeremiah is a man of God. I believe the word he has spoken. Let us do what he says.” Instead, Zedekiah spoke out of the other side of his mouth in saying, “Look, he is in your hand. For the king can do nothing against you.” (Jeremiah 38:5). As a result, the princes put Jeremiah into a miry dungeon. Soon after, a righteous man named Ebedmelech comes to Zedekiah to plead for Jeremiah, saying “he is likely to die from hunger in the place where he is.” (Jeremiah 38:9). Zedekiah then turns his other face and commands that Jeremiah be released. Does the term “wishy-washy” come to mind when you think of Zedekiah?

Now Zedekiah turns to Jeremiah again and wants to know what God’s will is and here is where we see the basis for Zedekiah’s waffling. Jeremiah repeats the message regarding Judah’s future at the hand of the Babylonians. “And Zedekiah the king said to Jeremiah, I am afraid of the Jews who have defected to the Chaldeans, lest they deliver me into their hand, and they abuse me.” (Jeremiah 38:19). So that was the bottom line with Zedekiah. He was afraid. Even though Jeremiah proceeded to tell him that he had nothing to fear of them if he would only do God’s will, his words apparently fell on deaf ears. As earlier noted in the chapters in 2 Kings and 2 Chronicles as well as in Jeremiah 39:1-8, Judah fell and Zedekiah suffered greatly.

The great prophet Elijah asked the Israelites of his day, “How long will you falter between two opinions? If the LORD is God, follow Him; but if Baal, follow him.” (1 Kings 18:21). Jesus said, “No one can serve two masters; for either he will hate the one and love the other, or else he will be loyal to the one and despise the other. You cannot serve God and mammon.” (Matthew 6:24). The apostle Paul wrote, “For do I now persuade men, or God? Or do I seek to please men? For if I still pleased men, I would not be a bondservant of Christ.” (Galatians 1:10). When it comes to spiritual matters, there can be no fence riding. We must make up our minds and, for the sake of our eternal souls, we must make them up according to the will of God.